Exclusively air-driven operation is an essential feature of the cyclic activated sludge process BIOCOS. Switching the air-flow between diffusers, agitation and recycle air-lift keeps operation and maintenance simple and leads to significant energy savings of more than 20% typically used for mechanical devices. This hybrid technology shows a constant water level characteristic for continuous flow systems and time-based control typical for SBRs. Modular rectangular tank configuration and high solids operation targets a compact foot-print. During the last years more than 100 BIOCOS-plants have been implemented mainly in Germany, Austria and Spain and some of the operational results are presented in this paper.

The activated sludge process is most commonly accommodated by 2 process technology families – continuous flow systems and SBRs – and there is a less common hybrid technology in-between targeting combined benefits:

Conventional continuous activated sludge systems are characterized by sludge recycling (RAS) requiring adequate piping and a RAS pump-station. For nitrogen removal the electron donors and -acceptors, i.e. carbon and nitrate, typically get into contact either by an internal recycle flow towards a pre-anoxic zone (MLE-process) or by influent distribution towards a staged configuration (step-feed approach). Control flexibility is achieved to a degree that is limited by the range of recycle rates and the availability of additional aeration volume or swing-zones, respectively.

In SBR-systems all reaction and separation processes are handled within one tank targeting higher control flexibility and avoiding the need for any recycle flow. The high flexibility of such a multi-task reactor is paid by additional equipment since the whole volume needs to be enabled for each unit-process operated in individual phases – meaning the settler requires mixing- and aeration ability. Moreover the avoidance of recycle flows is compensated by additional pump-head and equalisation need due to variable water level during filling. Obviously alternating activated sludge systems aim on the combination of the more established space- and time-controlled systems: Matching both features – constant water level and time-controlled operations can be achieved by switching the wastewater flow between two or more tanks. As listed above, the BIODENITRO process switches the flow between two alternating aeration tanks in parallel. In this way the influent carbon is directed to the non-aerated reactor with accumulated nitrate while in the other tank without feed ammonia gets oxidised and nitrate produced. The UNITANK-system includes settling abilities for each of the three alternating tanks in parallel. Although alternating flow allows for constant water level, all 3 tanks require the same complete equipment similar as for SBRs. Now the BIOCOS process uses only one aeration tank equipped with diffusers and operates two alternating settler-compartments equipped a simple air-driven mixing- and recycle equipment.

BIOCOS is a cyclic activated sludge system with an aeration tank (AIR in Fig.1) hydraulically connected to two alternating sludge recycling and -settling tanks (ALT 1+2). The effluent valve of one of the settling compartments is open allowing the feed-flow to the aeration tank to push out the supernatant water from the corresponding settler. A RAS pump- station or any electro-mechanical equipment for stirring or recycling are not required – all phases of the operation cycle are exclusively driven by pressurized air from the same blower- source (Fig.1) saving a lot of effort in operation and maintenance 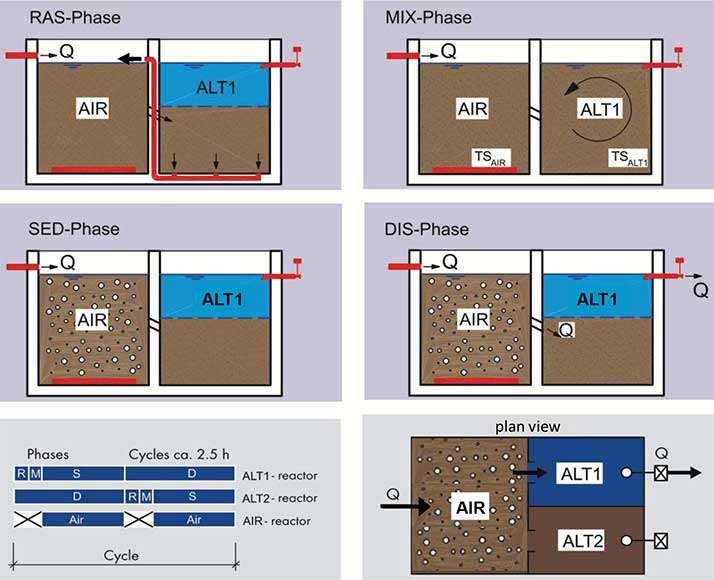 The infrastructure of a BIOCOS-configuration for each liquid train consists of an aeration tank equipped with membrane diffusers providing intermittent aeration (Fig.2, left). More specialized equipment is installed in the two alternating settling tanks: Drain-pipes are mounted directly alongside the bottom of the tanks connected to vertical siphons at the sidewall towards the AIR-tank (Fig.2, right). Air-lift operation almost without any level-head difference produces flow-rates up to 1 m3/s generating sufficient suction head to transfer the dense bottom sludge layer. Recycling of the thickened sludge layer leads to a typically 50% higher mixed liquor solids concentration in the AIR-tank compared to the ALT tanks (Fig.3). This solids distribution is beneficial on one hand to high biological process rates and on the other hand to a sufficient settling velocity of the sludge blanket between 1.5 to 2.0 m/h.

The BIOCOS-wwtp Schierling has been designed for an organic load of 17000 PE in terms of 60 gBOD per person and day and it provides simultaneous aerobic sludge stabilisation without upstream primary clarification. More than 5 years’ worth of operational data confirms the efficiency of the air-driven sludge recycling concept. Averaged daily measurements of the mixed liquor solids concentration (MLSS) in the settling tanks yield a value of 3.7 g/L. The MLSS in the aeration tank reaches consistently higher values and 5.3 g/L in average means 43% higher MLSS in comparison to the settling tank after mixing (Fig.3).

Fig.3. Operational data of the BIOCOS-plant Schierling (Germany; 17000 PE) showing a comparison of MLSS-profiles in the aeration tank (AIR) and in settling compartments (ALT)

Fig.4. Operational data of the BIOCOS-plant Schierling showing a comparison of SVI- profiles with and without the application of a mechanical RAS-pump An interesting impact from air-lift operation for RAS recycling was observed when comparing with pump recirculation at parallel lanes at the WWTP Schierling. The unique comparative set-up of pump-recycling and air-lift recycling was mainly conducted to investigate solids distribution and energy up-take. The more surprising was the fact that sludge in the BIOCOS-lane with air-driven recycling in the same tank volume and under the same loading conditions developed significantly better settling properties compared to the mechanical recycle system. Obviously the more gentle recycling strategy without mechanical shear-force improves solids aggregation. During an operational period of more than 5 years the average SVI in the settler with the RAS-siphon was at 67 ml/gTSS compared to 88ml/gTSS in the settler with RAS-pump, meaning at a 24% lower value.

There is a major difference between a continuous activated sludge system with almost no sludge blanket in the settler during dry weather conditions and a cyclic process where reactive settling occurs. When the sedimentation phase starts the homogeneous sludge blanket settles and serves as a floc-filter taking fine and dispersed particles out of the liquid and improves TSS and COD-effluent concentration. This performance is demonstrated by the operational data shown in Fig.5 with an average COD effluent concentration of 15 mg/L representing a COD removal efficiency of 97%. The importance of low particle- and COD-concentrations needs to be high-lighted especially for scenarios with water reuse options. Additionally the sludge blanket especially in the dense bottom layer promotes endogenous denitrification. The measured average effluent concentration of total nitrogen during the last 5 years was 2.4 mgN/L (Fig.5). Considering a total N influent concentration of 75 mg/L the removal rate achieves again a value of 97%. The measured specific energy uptake for the BIOCOS process in 2011 was at 14.6 kWh/PE/a.

Usually new wastewater treatment plants experience design loads only after several years of operation. A different situation applies for the new green-field BIOCOS-plant in Schladming, the venue of the skiing world championship in 2013. Hosting this large sport event for a period of two weeks the design-load of 31000 PE has been exceeded already within the first half year of operation. The Schladming wwtp provides conventional primary clarification, processes solids in anaerobic digesters and utilizes produced methane for the electrical supply of the plant. Already one month before the championship took place a stormwater event caused high hydraulic loads testing the flow- and solids separation capacity of the plant. The peak-flow event is clearly visible even looking on daily average values (Fig.6) showing a flow-rate of 10648 m3/d which represents more than the 24-fold of the hourly design load of 432 m3/h. Although the MLSS-concentration in the BIOCOS-tanks was high in preparation of the sports-event no wash-out of solids was observed. 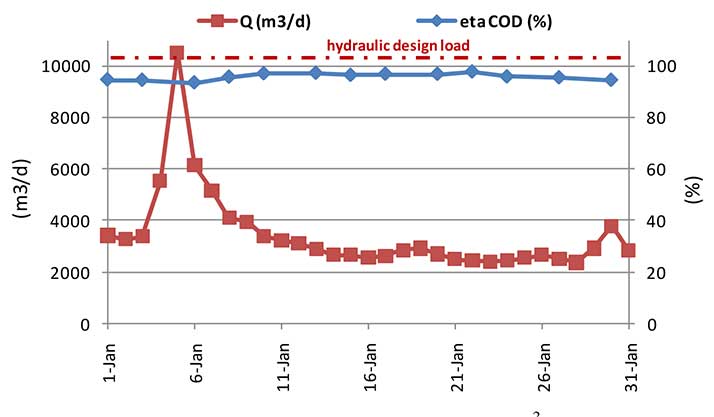 Fig.6. Stormwater-event generated a hydraulic load of 10648 m3/d (more than 24-fold hourly design load of 432 m3/h) without any indication of wash-out of solids at the BIOCOS-plant Schladming (Austria; 31000 PE) 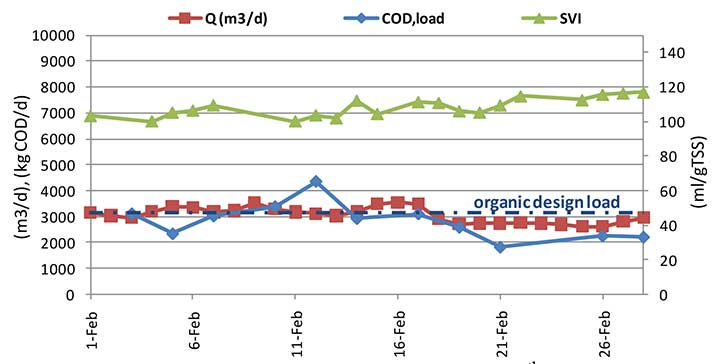 Fig.7. Maximum organic daily load of 4359 kgCOD/d on the 12th of February 2013 (or 3444 kgCOD/d average weekly load during the skiing world championship) was significantly higher than the design load of 3100 kgCOD/d During the championship the organic influent load achieved its maximum of 4359 kgCOD/d exceeding the design load of 3100 kgCOD/d (Fig.7). Additional biomass was retained in the reactors leading to an MLSS concentration of around 6 g/L. The SVI was maintained around 100 ml/g until the feed-load decreased and higher SRT resulted in a 10% increase in SVI. The effluent concentrations remained stable during the whole high-load period and monthly average removal rates achieved values of 97% and 73% for COD and for nitrogen, respectively (Fig.8).

Fig.8. Despite high organic loads during the skiing championship monthly average removal rates achieved values of 97% and 73% for COD (left) and for nitrogen (right), respectively 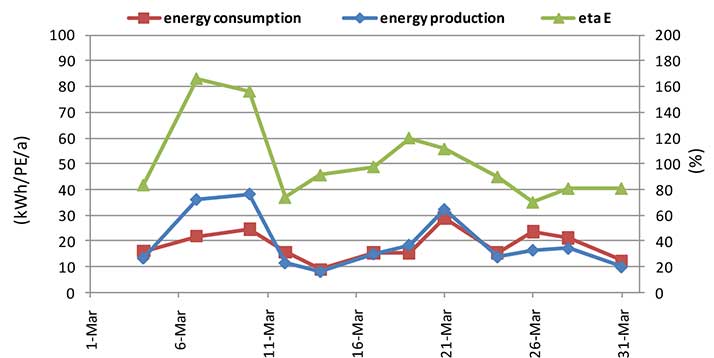 Fig.9. In March the specific electrical power production of 19.2 kWh/PE/a was beyond the consumption (18.2 kWh/PE/a) and thus 102% of the monthly energy demand of the BIOCOS- plant was covered

The BIOCOS-plant is driven by 5 blowers, one for each train for the base-load, one additional blower each for the tourist seasons and the 5th blower as stand-by. These blowers are the only power consumers for wastewater treatment and the demand can be easily compared to the energy production from biogas by the cogeneration system (Fig.9). Due to the relatively small size of the coupled heat power system its electrical efficiency is in the range of 33% to 35% while larger units would be available at 40% efficiency meaning 1/5 more energy production. The generated heat is used to heat the operator building and the digesters to mesophilic temperature. In March with steady operation of all unit processes the produced electrical energy amounted to 102% of the energy used for the BIOCOS system. This way the BIOCOS

Investigation of denitrifying Bio-P activity in the settling sludge layer

During longer non-aerated periods at the BIOCOS Schierling significant release of phosphate was observed. To brighten insights into underlying process mechanisms 3 measurement campaigns have been initiated (Brückl, 2010) each with samplings at 3 different levels in the settler during a whole process cycle (Fig.10). Nutrient compounds and filtered COD have been measured to generate profiles and to track temporal and spatial pattern.

Usually biological phosphorus uptake is enhanced by exposing biomass to anaerobic conditions at high VFA-availability – typically in an upstream non-aerated tank where RAS and raw-wastewater is introduced. Under these conditions phosphate accumulating organisms (PAO) release phosphate for energy generation and take up carbon for growth. In case of extended anoxic phases specialized organisms can get established which are able to accumulate phosphate simultaneously during denitrification (Qiuyan and Oleszkiewicz, 2009). These so-called denitrifying PAOs do not achieve as high rates in phosphate up-take as in aerobic conditions but can take benefit in predominantly anoxic systems. 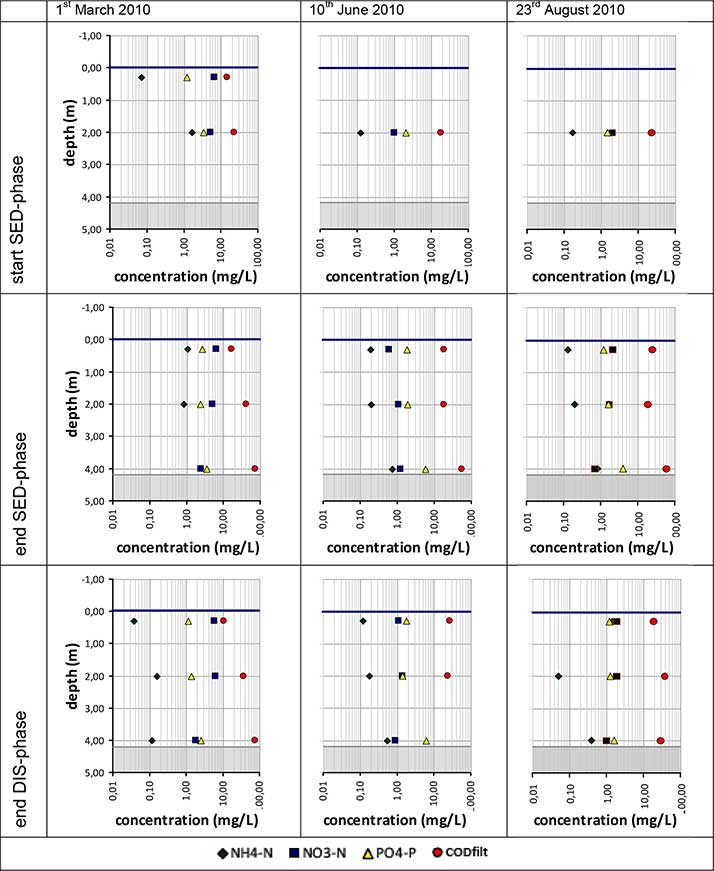 Fig.10. Nutrient profiles along the depth of the settling compartment during one operation cycle indicating release of soluble COD as a driver for denitrifying Bio-P

After the aerobic mixing phase at the beginning of the sedimentation phase both soluble COD and nutrient concentrations are low (Fig.10). In the course of the settling process especially in the denser bottom layer soluble COD increases from ca. 15 mg/L to ca. 60 mg/L and in the same time the phosphate concentration increases from ca. 1 mgP/L up to 6 mgP/L. The supernatant water layer from where the effluent is discharged shows hardly any change in COD- and nutrient concentrations since the releasing biomass has settled towards the bottom of the tank.

Obviously due to denitrification nitrate gets depleted in the thickened sludge layer reaching ca. 1 mgN/L in the bulk liquid and probably complete removal inside the flocks. Under these anaerobic conditions and at increasing availability of soluble COD from endogenous release the denitrifying PAOs start to release phosphate and pick it up once nitrate or dissolved oxygen becomes available again.

Data acquisition has been supported by the operators and the responsible consultants (ZWT and Wagner Consult) of the two BIOCOS-plants Schierling and Schladming which is greatly acknowledged.

Zhang, F., Liu, J. and Sui, J. (2007). Sludge concentration dynamic distribution and its impact on the performance of UNITANK. Journal of Environmental Sciences, 19, 141-147